Summertime (or, when it rains it pours) 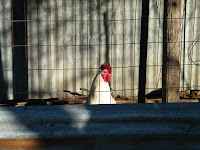 Snowball - Still reins over his throne

It seems as if whenever something out of the ordinary happens on the farm, I remember that it's been awhile since I've updated the blog and say to myself that I need to get that done soon. Seems things have been coming down the pike so quickly lately I've not had time to put them into thoughtful words to share. After this morning's events though, I thought it was time to stop, sit down and reflect - if for no other reason that doing so helps us to heal our hurts and move on.

Last night, there were dogs growling/barking and apparently taking up residency under the floor of my barn's feed room. Thankfully, none of my boarders or any of the horses were injured or attacked - but none the less, they were unwelcome guests and I called the authorities to have them removed.

Falling short of that, citing that they were unable to reach them under the floor and apparently thinking it was better to set a trap overnight than try to lure them out and finish the job right then, I was left with a trap full of canned dog food and a wish and a prayer that this would work out as they planned.

So this morning at 6, I headed outside to enjoy the cool of the dawn air and feed my chickens, cat and horses and see how many of the stray dogs had managed to share the food in the cage. None. Not one dog was in there. Where had they gone? How strange that they weren't attracted to that smelly dog food? 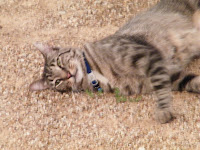 I fed my horse and let out my remaining cat, Eve; my sweet boy and everyone's most favorite cat, Solomon, met his demise two weekends ago after not being put back up one night, as I generally do. A coyote apparently thought he would make a good meal as there wasn't much left of my poor Solomon when I found him early the next morning. I then went through the barn to let out the chickens. Hmmm, that's strange - how did those silly chickens get the side door to the coop open? OH NO!

Snowball, Snowflake and one of the older yet to be named hens somehow managed to survive the brutal attack and mass murderous event that must have taken place late last night or early this morning - earlier than 5 when I got up or surely I'd have heard commotion.

Needless to say, I'll not be selling any eggs for quite some time. Snowball has some recovering to do as does one of his mates - Snowflake appears to have escaped virtually unscathed - somehow. Thankfully, I don't clip their wings - so she must have "flown the coop". I'm sure it will be some time before there are any eggs laid or any eggs fertilized in there for that matter. Snowball is in pretty decent shape considering the lack of feathers and bite marks but still needed to be doctored a bit, I think that he'll be fine eventually though. The hen I'll watch closely as she seems to be the most injured. Snowflake is a bit shaken up, and I can't catch her to examine, but looked ok from what I can tell. 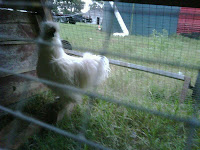 Tootsie - our silly rooster in pj's


Unfortunately, Tootsie, Sister's Daughter, our last Bantam hen, and 8 of their coop mates weren't so lucky. A mass burial was held out back in one of the many mulch piles in order NOT to draw any coyotes up close to the barns. Hopefully we were able to bury them deep enough - I'll add some liquid molasses later on to help hide the odor and break down their remains into compost.

So one of the lessons here, is that you can't make a chicken coop out of chicken wire for one thing. You must use reinforced hardware wire - which I pulled out to replace the chicken wire with after the last kill of my pullets this winter but somehow never got "a round tuit". The dogs were up underneath the floor in one of the barns where there is about a 3' space, (that I've been meaning to board up - to keep the ducks and chickens from laying eggs where I can't reach them!) Not really big enough for the animal control officer to crawl into - but had he to do it over again last night, I think he'd have fired that dart pistol in there until he got them and then figured out how to drag them out later. Or, tried to lure them out with the dog food rather than just set up a trap and hope for the best.

Too late for that now - I imagine they'll be "put down" once they get back to the shelter (they were holed up in the chicken pen area with their victims and were finally "darted" and taken into custody.), and no one comes to claim them. Are dogs not pets anymore - just creatures people throw away or leave to run on their own? Faced with having to shoot a dog, I don't know that I could do it - not permanently anyway. Dart yes, bb, yes. Kill? Probably not me. I'm too soft for that. But I do have a few choice words for people who let that kind of animal run loose. This is a family site though, so I'll let you fill in your own thoughts....

Of course the dogs' owners had no ID tags on them. No irresponsible dog owner would do such a thing. Why that would mean they had to be sure their fences and gates were secure or they'd face a fine for stray, potentially vicious dogs on the loose, (yes, they were pitt bulldogs, but that doesn't really matter - put more than one dog of many breeds together, and they will chase down and kill chickens).

So there will be no restitution for my losses. My CSA members will not be able to get any eggs for quite some time and I'll be fortunate enough to find sufficient quantities for myself from the loose barn chickens that run around the pasture on the other side of the farm. They lay simple brown eggs which we mixed with the blue and green and pale pink ones from those that resided in the pen area. I'll be down to about 2 or 3 eggs a day - if I'm lucky enough to find them. I'll give Snowball and the 2 girls some time to recover and me enough time to really build a compound before I even think about whether I'll go outside of my flock to increase it or not. I've not brought in chickens from outside for several reasons. One is risking disease/pests spreading to my existing chickens. The other is trying to model a sustainable flock where my roosters do that for me.

So this week's projects of course include securing the remaining chickens behind the hot wire gate again, which was more for keeping out the skunk and raccoon that were terrorizing the baby chickens than dogs. As well, I'll have my farm's carpenter get on reinforcing the other coop STAT! And, I have decided that it is time to invest in some electric fencing designed for poultry. Premier One has a kit that I believe I can use with my existing electric charger to keep out anything - even vicious dogs. We leave the ground cover overgrown to provide shelter from hawks. I was reserving the electric fencing for use out in the pasture once we built our chicken tractor to use in the gardens for soil improvement, but it seems my budget will just have to be stretched early and again later on when the tractor is built - I can't keep going through this - I'm just a soft city-girl living on a farm and my heart just breaks every time this happens.

So, in addition to the August-like, season ending extreme temperatures this June, losing my favorite cat, various other disappointing things that just happen in life to all of us from time to time, to this morning's very sad events - I'd be putting it mildly to say that I'll not be too sorry to see June 2011 leave me and my farm behind.

I accept these things as learning experiences that force me to face certain things and make changes in myself where needed and forge on ahead. There's a lot of life left to live and all this stuff does help make us better somehow in the long run. We never know how today's events will turn out to change something tomorrow or how it will help someone else along the way.

We've turned under many of our crops due to failure from the heat and are hoping that we'll be able to nurse along new crops recently planted for an early fall harvest this year. We'll be erecting shade cloth as soon as they get their first true leaves to help protect them from the July and August sun which surely won't be any less merciless than it has been since late May. 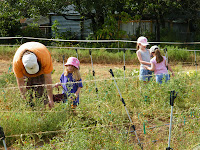 
Life on the Farm is not easy, that is for sure. Rewarding, challenging, exhausting, delicious and enlightening - yes. But easy is not a word I'd use. I have a lot of plans for this little urban piece of paradise, even though we've had our share of setbacks. If I can just keep my feet under me long enough to get them in place and start working, we'll have an even more wonderful farm to share with the community than we already do. 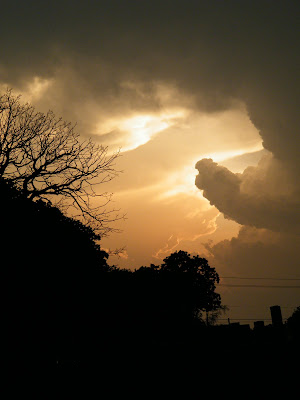 Everyone who comes here loves it and vows to return - and usually does. I know it is a special place worth preserving and restoring and sharing with whomever we can. It grows more than just good things to eat - it grows people, experiences and character. I can't prevent every disaster, error or mishap - but I sure can get to the place where I'm not band-aiding everything instead of really fixing or doing it right the first time. Baling wire and duck tape are ok - but I'd rather have the right tool for the job. Thanks to everyone who comes out to the farm and helps. I can't do it alone - and I'm grateful for those who also share the vision with me. We will grow and continue to add programs and more crops to share with the community.

Here's hoping your gardens are green and growing better than ours up in North Texas are.

And on the upside - we got over 3 1/2 inches of rain and were able to harvest over 100 lbs of heirloom carrots!