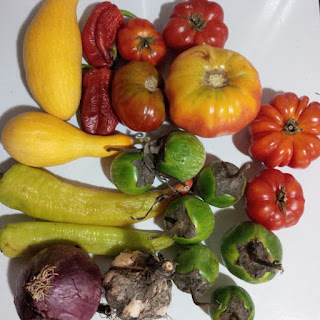 If my memory serves me correctly, the first time I was served ratatouille, it had been prepared by chef Graham Dodds who has presided over several wonderful Dallas restaurants since I started farming, and becoming more aware of my taste buds. You can, and definitely should, go check his art out at Wayward Sons in Dallas, where he is now currently cooking up a storm of wonderfulness!

It was such a colorful dish; full of reds, greens and yellows. And it tasted so good! I looked it up to see what all was involved in making this dish, that’s how much I liked it! There was no way I could just figure it out from eating it, because remember last post I told you, I'm not a chef!

So today I’m sharing with you a version of ratatouille that begins with the recipe I found on line under Martha Stewart's web site. Of all the paper, real life handed down and gifted, food stained cookbooks I have at my house, I can't believe that I had to find it on line. But you can find the list of ingredients and more detailed instructions here.

The above photo shows the base ingredients from my farm and a few from the farm of my friend and colleague, Beverly Thomas who owns and operates, Cold Springs Farm near Weatherford.

She grew the banana peppers, those cool little green eggplant, and the red onion. The rest is from my place. Tomatoes, yellow squash (in lieu of zucchini), bell peppers, garlic and not pictured, fresh oregano and a secret ingredient I’ll tell you about later.

I started out with very ripe, fresh tomatoes. The recipe calls for cans, but – nah – if you have fresh ones, that’s what I’d opt for, every time. As you can see, I mix and match varieties. Here are Hillbilly, Costoluto Genevese, and Burbank Slicers – I think. 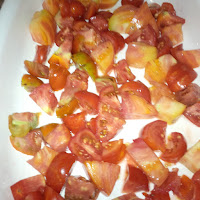 I chopped off the stem/core and then chopped them up into chunks. I tossed them into a baking dish and drizzled them with some olive oil, gave them a stir and into the oven they went. As per directions, I stirred them every 10 or so minutes; keeps them from sticking and blends the flavors as it thickens. 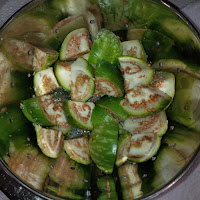 Meantime, in between stirs, I cut up the eggplant into chuncks and salted them with the Real Salt that I sell here at Eden's, using the larger crystal or “kosher” version, and set them on top of a paper towel. This “sweats” the eggplant of its excess moisture. 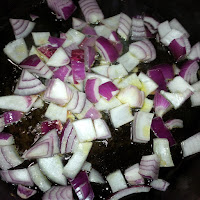 Next up is to sauté the chopped up onion, just till it was a little translucent, and then add the garlic. Now Martha’s recipe calls for an entire head of that stuff, and that may be why, in part, I needed the secret ingredient at the end, but since I’d only made this once before, I went ahead and followed the recipe as it was written for the most part. 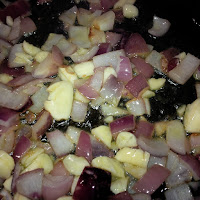 The variety of garlic I used was Burgundy, I believe.  A Creole Hardneck garlic with a well deserved reputation for its combination of rich taste and striking beauty. I had 3 kinds this year but I am pretty sure this was the variety I grabbed. 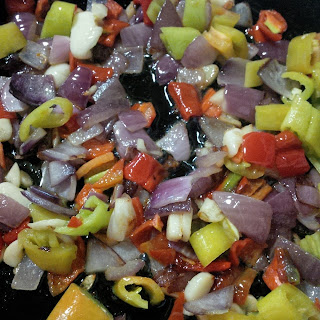 Next into the hot olive oil goes the peppers. I had a couple of small, bell style that were starting to get wrinkly I thought I'd better use up, and I thought I’d add 1 or 2 of the pretty lime green banana peppers from Beverly’s place, too. I had tasted one last Sunday at the VeggieVan and thought it was a little warm, but didn’t think it would spice up this dish too much with all of the other ingredients that are included. Ha!

After stirring and getting the peppers all nice and crispy, and after stirring the tomatoes several times and letting it get kind of syrupy, I combined them into the cast iron skillet, along with fresh, chopped up oregano. 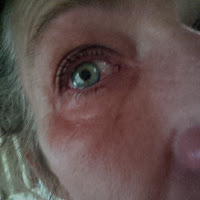 Side note – be sure to wash your hands really well after picking your oregano, and before fishing out of your eye whatever flew in it on the way back from the garden – or be prepared to cry. ouchie. My friend Trish says that a drop of coconut oil on the corner of the eye will put the fire out. Next time, if there happens to be one.... 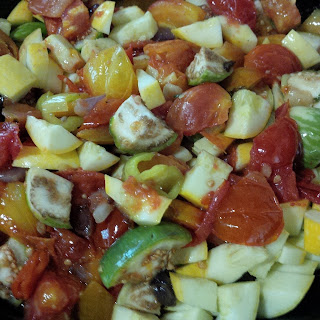 Now the kitchen is really smelling yummy! Chopped squash and the eggplant are last to go in. Simmer a bit more, turn it down a little, then cover; leaving just a little of the lid open for escaping steam.

A few minutes later, I just had to have a taste to see how it was coming together. Added a bit more salt, I never seem to use enough at first, and then a couple of tablespoons of the red wine vinegar and it should be done. 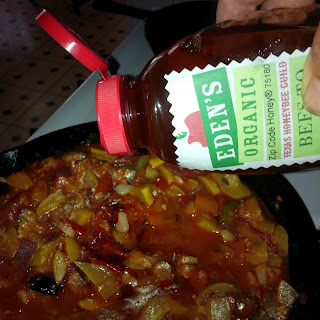 Well, I wasn’t expecting quite the kick out of those banana peppers that I got, or maybe it turned out to be the full head of garlic. But at any rate, the day before at Market Day when talking about making this dish with my friend and bee keeper, she mentioned using what sounded like an odd ingredient to add to this otherwise savory dish. But, alas, I decided it was what I needed!  Honey. Susan had just brought a case of our “spring” harvest Zip Code Honey®, too.

I needed to cool the dish down because I am not a fan of chasing every bite of my food with milk or something else to cool off my tongue or throat. 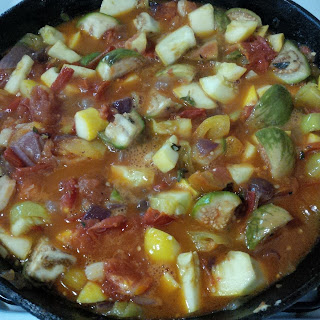 Now, it was going to be perfect! And it is!! I like to eat mine with some fresh baked, crunchy crusted bread and fresh butter, the real kind.  The bread was still rising and I was hungry though, so that will have to wait for next time. But boy was this a great lunch! And you don't have to be a chef to make it - but it's good to have it made for you, too!

Now, since today happens to be National Ice Cream Day, I will follow it up in a little while with a big ol’ banana split! Sorry, not pictured – I have to get some of those goodies at the store, yet. Nothing better than a homemade banana split to cool down a slightly spicier than planned lunch!

I think a pint of Ben and Jerry's non-GMO ice cream and some organic bananas are in my immediate grocery list future!