Farm to Stage with Local Farms & the Dave Matthews Band 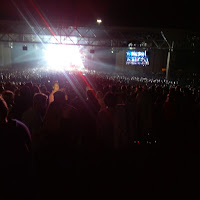 If you’re a Dave Matthews Band fan, here’s another thing to add to your list of reasons.

DMB teams up with Reverb and Dega Catering to “green” their tour in several ways, including reaching out to local small farms in each of their tour stops around the country. This can be a great opportunity for small farmers who often have a limited market audience and surely a good thing for the crew on the road’s diet. No fast food meal plan for these folks!

However, as a farmer myself, a market manager and longtime member of TOFGA, (Texas Organic Farmers and Gardeners Assoc.), I am all too familiar with how difficult it can be for farmers who live on the far outskirts of the city to be able to participate, due to communication and time constraint issues.

Often, according to Chef Rob White, the tour’s current chef, not all farmers are very well connected or accessible and are hard to reach. Many are without even email or reliable cell phone connections which can make coordination on such a tight schedule a formidable challenge. Add to that the window of time to deliver the produce to the venue, and many farmers just cannot make that extra trip due to time constraints.

For the past several years, after Reverb’s initial heads up type contact with me, Chef Fiona Bohane has reached out as the band approached their Dallas stop, to see what would be available. With several farmers and ranchers participating in Market Day at Eden’s, I was able to offer her a nice selection of produce and grass fed meats. Fiona is home loving on her new baby girl this year, but Rob White, back from a 5 month break, has taken over the tour with many of the same support staff.

This year after I got that first call from Reverb’s Paige Roth, I knew with producers' production at Eden’s Market Day low this spring, (due to various factors), and my soil still in recovery mode from all of last year's flooding, as well, I would need to reach out beyond my initial contacts to be able to provide a rounded list and found 9 other farms growing a nice range of produce who agreed to participate.

From East Texas to west of Weatherford, Chef Rob chose from a list of winter kale and root crops to early spring peaches and even bi-color corn! “This is by far the best stop, so far, on the tour!” Rob said, adding that having someone to help coordinate so many farmers ahead of time for him, was a big added bonus. (After checking their tour schedule, I see that Dallas is only the 3rd stop so far, but we’ll take the compliment! LOL)

Being located so close to downtown Dallas and center point between east and west DFW helps me to be able to do this without too much driving or interruption of my work schedule. I was able to meet farmers part way in some cases or early at the downtown DFM, a 5-minute drive from the final venue.

I enjoy the interaction with my peers, I’m always learning – and amazed – at what they’re growing and how they are doing it. And I love to help shine the spotlight on fellow hardworking farmers who don’t always take the time to toot their own horns – well deservedly!

I mean, it’s only early May in North Texas and Farmer Bev of Cold Springs Farm CSA is harvesting sweet corn, Farmer Ken down at Larken Farm has hordes of flavorful, ripe peaches and Farmer Doug from Grow it Forward in Edom is pulling in summer squash!  Farmer Megan and her father Jack up in McKinney pulled the prettiest and most delicious order of multi-colored carrots; the order for which the chef was grateful for having been too late to cancel, he said. Beautiful and delicious!

Rosey Ridge Farm supplied butter, cream, homemade chow chow and early onions. And while even though some health issues have slowed things down at Farmer Jones’ place, beautiful garlic scapes and Farmer Rita’s ever abundant bucketful of beautiful assorted fresh herbs accompanied the rest of the produce, along with the cardoon, coriander and pea tendrils that came from Eden’s. The back of my truck always smells heavenly on the way to drop everything off. 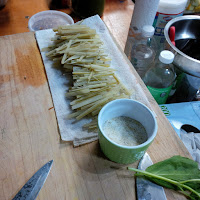 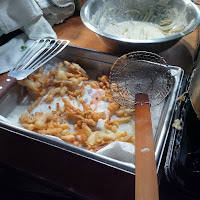 Cardoon is pre-cooked, sliced & dipped in a special batter using soda water to create the bubbly effect when deep frying...yum!


After turning out a gourmet quality meal, for the entire crew and band, buffet style and always a most beautiful spread that includes signage of contributing farm names and ingredients used, the kitchen crew breaks down the entire kitchen to be packed, loaded and transported to the next stop. All of the food scraps are gathered up, Reverb puts them into bio-degradable bags, hands over two tickets to the show and loads up the compost in my truck! Thanks Pati! 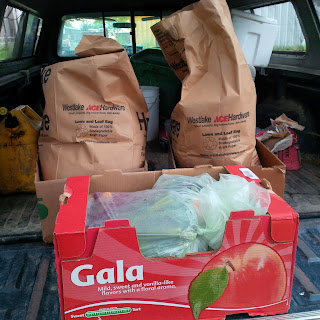 The ride home doesn’t smell nearly as good as the ride in, but whatever the chickens won’t consume, gets turned into the compost piles and breaks down to help grow more great veggies - for next year’s tour! It’s a win-win for everyone, from the fans to the environment.

Note; I was originally and incorrectly informed by someone on the tour, in passing, that Chef White had been a trainer of Chef Bohane. The correction has been made and I apologize for any confusion this may have caused. Obviously, not a reporter, or I'd have done better to check source details for accuracy. ;)  Thanks for your understanding to those affected.
Posted by Eden's Gardener - Marie at 11:38 PM