So I promised you all an update on my soil’s recovery. I’ve not pulled soil for another test yet, in part because I’m pretty sure it’s about the same, despite the fact that I’ve applied all of the suggested amendments. That’s right. At least in the nitrogen department, I can see from looking at the non-native plants growing, that’s all of the veggies, that they still lack this basic nutrient in many of the beds.

The problem with Nitrogen is that it is water soluble, meaning if it rains and there’s not enough organic matter in the soil for it to cling to, it will simply wash out. This is proving true with many of the artificially applied nutrients, I imagine, though I have not yet confirmed. It has to do with ionic charges - a subject I studied, but could never effectively explain it without looking it up. So here is a brief explanation. I do know that sand's CEC is very low and only one of the many reasons to build up organic matter.

Remember, I’m growing in the equivalent to a box of marbles – sand. According to the soil test done last Dec., on a scale of 1 to 8, 8 being most clay and 1 being most sand, my soil scored a -5. Just kidding. It scored a 1. That's as low as you can get.

But the good news is that according to the NRCS, before all of the horses over-grazed and prior land owners neglected this land, it was considered “prime farmland”. So I have every hope that it will be restored from its current desertification status back to prime farmland and a sandy loam texture that produces abundantly.

I am seeing improvements in many areas from the time I was able to start really spreading compost out on the beds with the loader. Some of the earth smells like fresh forest soil, the way it should smell.  And I can see small particles of organic matter in the color changed soil – no longer brown, sandy but a darker, “dirtier” color – you know, like soil! But in other beds, it seems the compost was just sucked into a black hole. It's as if I never added a thing.
With the spring’s heavy rains, I am sure a lot of what was applied in December has since long washed/leached away again in the areas that remain predominately sand. I hope to be able to take more individualized soil tests this spring instead of combining soil into one test – this can get costly if you run full spectrum tests and do so for several areas – (so please commit to joining our CSA for this fall, that’s the sort of thing your membership pays for!).

Until then, I need to do continuous foliar applications of fish or a poultry manure based fertilizer to keep the N up for the plants to grow throughout the summer months. I add compost tea that I make from my finished compost piles which adds microbes and bacterial, other very necessary components to breaking down the nutrients in the soil, to make them available to the plants.

And while I’ve been advised to use everything from plain sugar, worm casting tea to sea salt, use more mulch, less mulch no mulch, etc.,; I honestly don’t think there is one silver bullet to fixing tired soils. I'm using a little bit of all of these methods but 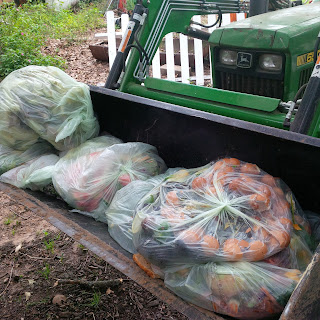 if we look back to farming of the old days, they used what they had most available on the farm – manure and plant debris. And achieving sustainability means utilizing the means of the farm, as much as possible; reducing and even eliminating the purchase of inputs from outside sources.

I have access to both manure and plant debris. Of course, it just takes time – compost happens – gradually. And thanks to the new loader, I’m making more and more piles of compost out of the piles of dumped wood shavings and horse, chicken and sheep manure from the farm. I also add vegetable scraps, like those I received and talked about last blog post from the Dave Matthews Band’s tour. 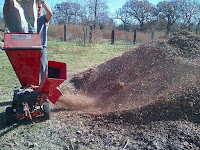 I used to collect leaves by the pick up truck bed-full, although with the theft of our nice shredder/chipper, this isn’t as efficient any more because they break down much better when cut/chopped up. Running them over with the brush-hog scatters them out a lot more than when you run them through the shredder into an enclosed area where they can be scooped up and added to the compost pile. (I'll still take your bags of leaves though! They are still good to add to the compost.)

I’ve also added a manure spreader to our farm’s wish list for this fall's Chefs for Farmers' event. The fine folks at CFF said that they’ll make note of this item for this fall’s big shindig in which they're compiling wish lists for the farmers attending. I hope they can raise enough for a spreader! That would be such a big help in spreading compost out on the beds. A lot less labor on my part.

For now, I use a small lawn tractor trailer attached to the back of the tractor and a shovel and a rake to dump from the trailer and then spread out sifted compost onto the soil. When I’m spreading out just on top of the soil layers, I use the loader with the chunkier compost and then lightly rake it in with the disk where it can be over-seeded with a cover crop and break down over a season.

I’m getting pretty good at using the disk with a light touch, instead of digging it into the soil as when one is breaking up grasses or new beds. Not adding raw mulch is key because it will compete with the plant materials for available N to break down. As seen here in the garlic where it's been planted directly into a deeply mulched row as part of an ongoing research bed, testing the technique of one of my colleagues.

So, that’s a basic update! Slow but steady - that's how topsoil is made!