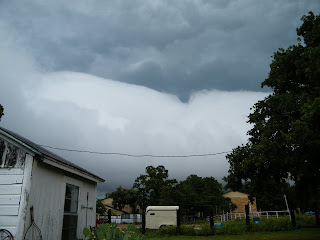 Recent twister passing in the not so far distance from our farm.
Recent storms spared us of any rain - or anything damaging.
We've been like the center of the Bermuda triangle as of the past few storms - a blessing in disguise.


After seeing the devastation that the recent storms caused in Texas and as it ripped through the rest of the deep south, I'm reminded of how blessed I am to have been spared any damage. I complain and even joke about not getting any rain, barely a 2 minute drizzle with that last batch of pop up tornado rainstorms this past week, but after seeing what some of my fellow farmers have had happen - I'm happy to irrigate!!

A hail storm can wipe out an entire farm in one fell swoop, a tornado can rip a barn roof off it's building, or worse and floods can carry away seeds and topsoil all in a matter of moments - as the farmers sit and watch helpless.

This is what CSA members share the risk in with the farmer. It is because of the loyalty of CSA members that a farmer can regroup, clean up and replant. And, in the 3 years I've been working the land here growing veggies, I can honestly say, I've not ever met a farmer that I've not just loved - it is the most supportive and least competitive group of people I've ever worked with! We are all in this together - growing food for our neighbors, friends, relatives and chefs alike. We do this because we love what we do and when one of us takes a hit - we all take a hit with them.

My heart and helping hand goes out to my fellow farmers at Eden Creek Farm in the wake of the recent storms. Y'all let us know what we can do to help out - and we'll be there!

While You (and I) Were Sleeping

There are so many amazing things about having a little urban farm that are more rewarding than I could probably ever verbalize. Things like, watching little kids' faces when they pet and feed a rooster for the first time, seeing fuzzy little baby chicks following around their momma learning to peck and scratch in the dirt for food, and hearing about how much folks are enjoying their CSA experience and the delicious food we are growing here at the farm.

But there are, and I suspect always will be, a few things that I just don't guess this city girl turned urban farmer will ever get used to and one of them is the loss of life on the farm.

I still cry out loud like a little school girl when I come out in the morning and find one or more of the animals I am trying to care for gone. This morning hit me especially hard....

Before I moved the shop here to the farm, I had a little store up in the north part of the city. I brought in 2 chickens, well, a chicken and a rooster. They were mates here at the farm and so I kept them together at my shop. They ran around the place and at night went into a crate to keep safe. Eventually, out hatched Chicken Little. You can see her and her late folks in the video. It was like a little comedy routine whenever they'd wander up into the shop. People always loved to feed them and watch them scurry after insects.

Well, upon coming back to the farm with them when I moved my shop here, Little Whitey the rooster was attacked and soon thereafter his little mate, Sister, showed up missing. Their little one, Chicken Little, had survived though and for the past 4 years has entertained me and countless others with her mild mannered temperament. She was recently the proud momma of 3 little chicks again this spring, too. That is until sometime very early this morning, when I suppose the circle of life came around and took hers and that of her 3 chicks. Her chicks, like her momma, are just gone, I didn't even find any feathers. And her lifeless little self was laying in the coop when I came to feed this morning, fully planning on turning them out into the chicken yard with the rest of the hens and their watchful rooster, Snowball. Today was to be freedom day. Instead, I am heartbroken. Many of my chickens go to the compost pile with the drowned squirrels, slow ducks and other compostable items when they meet their end-time. Chicken Little, however, like her daddy, has a resting place near our pond. Call me a sap, call me weak or a wimp. But when you start carrying them around and naming them - they surpass being just a chicken or "livestock" and become pets. And whenever I have lost a pet, I've cried buckets. This was no exception. 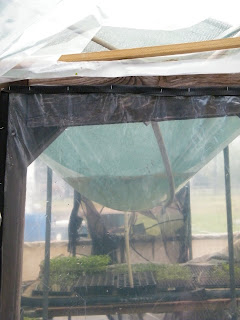 This morning it also started to storm rainclouds while I was sleeping, finally after months without any measurable rainfall. It was a welcome sound to awaken to, that is for sure. I heard a bit of hail but it didn't sound large enough to do any real damage to the crops. As daylight came, I could see standing water starting to accumulate -something we've not seen for ages save the time a water main broke nearby.


However, it was too much for the greenhouse roof which is now collapsed - again. Next year - for sure - we're going with metal hoops..... None of the plants were damaged, thankfully, and I've poked holes in the plastic to drain the water that weighted the frame down to its cracking point. It looks like a giant fishbowl. Soon, as soon as later this week, most of those plants will start going out in the gardens anyway and the plastic was scheduled to come off very soon, however, it is supposed to drop to the 30's tonight and I wasn't planning to put some things out quite yet - sometimes schedules were meant to be adjusted. Easter is almost here... thankfully.

But, life on the farm goes on, despite the losses of life, damage to buildings or crops, floods or droughts. Perseverance is one thing this little urban farm has sharpened about me. I've always been a determined person, but this has made me even more so. Nature sometimes seems to work against us, even though we are dearly trying to work with it. Sometimes I guess we just need to step back and re-evaluate things and re-route our course. For all of the hard work, blood, sweat and tears, it still makes for a cool way to make a living.

Marie
Eat Your Food - Naturally!
Posted by Eden's Gardener - Marie at 8:58 AM 1 comment: