The Rooster's Tale - tabled for now 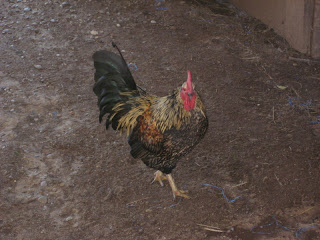 THANK YOU! To CSA members and Market Day customers who came out tonight and sent in comments of support - and to those of you who prayed and sent the positive energy our way even though you couldn't be here in person.

I'd say chalk one up for the roosters and the chickens as well as the people tonight!

Dozens of people came out to the city council meeting to show support for a tradition that has been passed down for generations and part of what makes Balch Springs so special - the keeping of fowl at their homes.

The issue is very near and dear to many a heart as young and old alike came to the podium one after the other to plead for the very lives of their roosters and hens. Keeping just one rooster and 2 hens, much less the outright banning of roosters all together, united the city tonight and caused the ordinance to be tabled pending a Town Hall meeting on January 31st – (soon as I get details of time and location, I’ll post it right here – but under the noise it sounded like the Mayor said at 1pm and usually the meetings are at the Rec Center on Elam Road).

Some who came forward said they actually moved to Balch Springs because they could have fowl. Others have lived here for decades raising rare breeds that near extinction, while others, such as me, have businesses that would be adversely affected by such an ordinance. And others still coming from within Balch Springs, as well as some who emailed comments in or drove from Plano, Dallas and other parts of the metroplex, voiced their support for what would, in effect, stifle their right to eat locally raised natural foods.

One young man also noted how raising livestock helped keep him off the streets and out of trouble growing up. City Council Member Charlene Rushing spoke of how many kids showed up tonight to do something constructive.

As I’ve said all along, this goes way beyond just keeping noise down or controlling illegal fighting of roosters. And even David Haas of the code enforcement dept. admitted it was not his intent to eliminate chickens from the city but to address 11 complaints since October. Sanitation and noise were the topics. However, they did go to other very urbanized cities from which to draw up the proposed ordinance they planned to discuss and take action on tonight.

“We don’t want to be like other urbanized cities”, claimed at least one citizen. That is why many moved out of those towns – because they outlawed a quality way of life that is quickly being challenged in small communities like Balch Springs all across the country.

If we don’t draw a line in the sand and preserve some of these “growing communities” for food production, we’ll eventually run out of places where it is legal to raise your own livestock and crops. Our children are counting on us to plan for their future.

Still not over, but this issue has made it to the forefront as WFAA and the Dallas Morning News sent reporters and cameras to cover the story. Next up, setting guidelines that keep the animals safe, healthy and natural – range free – without violating the rights of neighbors who may not share our feelings of love for the animals we raise. Stay tuned!