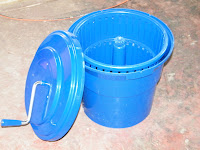 Well yesterday was warm and sunny, breezy and overall, quite pleasant. I hastily harvested everyone's salad greens, knowing what was in store for the morning weather. I managed to squeeze in getting some rows ready for onions and potatoes and once Liz arrived to help out, we got most of the rest of the week's share harvested and did some planting as I wanted the rains to water in these already late plantings. Seems we just can't get dry enough for very long! But, we're almost all in for onions and potatoes now; we'll just have some come off later and perhaps smaller than we'd like.

When I awoke this morning after having stayed up enjoying the last of the warmth rinsing and drying in our handy salad spinner, (although, I do suggest you soak and spin again before eating to rinse out any remaining "grit".), the promised cold wind and pouring rain had arrived. One brave solider showed up to help on this frigid morning - thank you, Paula, and we sorted and bagged, harvested some more and rinsed and distributed. What a day for being outside! Brrrrr to say the least. If I had lights outside, I'd have harvested the rest in the dark while it was still nice and warm out last night. Sorry Paula! We dodged the rain though and pulled up some of the farm with your onions and saw signs of brussles sprouts so i decided to leave them to see if they'll mature rather than just harvest for greens. (they taste just like cabbage leaves)

I came in for lunch after 1 to ponder what to make for my dinner after I ate up the last of my home made lasagna for my mid day meal. I knew I'd want something just as hearty after making the Green Spot delivery later on. Cold weather seems to make me hungrier.

I turned to my trusty Eating in Season cookbook by friend and fellow farmer, Carol Ann Sayle of Boggy Creek Farm in Austin. And wallah! I also found some of her great recipes for some of the yummies you all took home today. This cookbook is sold out now, and in for a revamping, so I'll have to share some of them here on line until she finds time between seasons to do some writing - and in Austin, where they really farm all year round, I suspect that won't be easy to do. In 14 years, Carol Ann and her husband Larry have only had 2 Saturday markets that they didn't open, and that was due to snow - in Austin. They grow a ton of food! And, here is what Carol Ann has to say about those incredibly beautiful red mustard greens and such.... 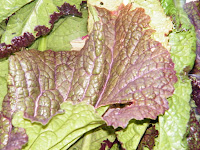 All greens in all stages of growth can be eaten raw. Some she says, are mild and sweet some are cantankerously hot, and some are bitter. I think the red mustard falls into that 2nd category!

If you want to eat them raw, try taming them with a sweeter dressing, maybe a touch of honey to a vinaigrette, or add some citrus, cheese or another more mild lettuce. But, she reminds us, the bitterness is the sign that the greens are doing their job!

To cook them, and not to kill them by boiling the life out of them, she suggests chopping up some onion and garlic with some olive oil and just as they finish the saute, toss in some chopped up greens. Cook them just a bit though, not till they've lost their color - or they've also lost most of their flavor and much of the nutrition. She goes on to say you can add these sauteed leaves to lasagna, fresh pasta or even tacos. I'm going to be adding mine to some soup later on tonight!

Many of us aren't used to eating fresh greens, myself included being from Midwest and not the south, but I've learned that they are soooo good for us and in the winter when we need them the most. So be sure to "eat your greens!" and share some recipes with us if you have them.


Here is one for the pak choi you can try;
Baby Pak Choi
1-2 T peanut oil (I'll use olive)
2-3 cloves of garlic (peeled and crushed)
salt (to taste)
pak choi (stem removed, cleaned well and chopped up into 1 inch pieces)
1T water or vegetable broth

Stir fry the garlic about 30 seconds. Add salt and pak choi and stir fry about a minute. If note enough liquid, add the water or broth. Stir fry for 3 more minutes and the sever with rice or hot pasta. If you were lucky enough to get one with some pretty blooms, toss those in raw or just warm them up - but yep, you can eat that part, too!

Sounds good to me!

And don't forget, when you do some stir frying, clean and chop up those onion roots - Wendy Akin from Akin Farm says a chef told her they make good eatin', too, and I've not tossed any roots from my green onions since.

The weather has really played havoc on some of the crops this winter. The cabbages won't head up, but seem to have just as much flavor, and the salad mix is having a ball bolting - that means, it is starting to flower and go to seed, ending its life cycle. But, we have no control over the ups and downs of the winter, and when it drops as cold as it did, even a warm up to our normal winter sends false signals to some crops that their season is over. (that is why they start to put out flowers and go to seed.) You can try braising some of those greens as well as enjoying them as salad mix. We cut them pretty tight so it may be a week or two before they grow enough to cut again. I'm hoping that one of the 3 varieties of lettuces we have in will be close enough to ready to harvest next week and we should be able to get some broccoli - hopefully enough for us all to get a nice head each - from another farmer who moved away. We'll see. Her dad is overlooking the gardens from a distance....let's hope not with his fork too handy.....

It's been tricky, but you all seem to "get it" and we'll keep planting and loving on the gardens in hopes that the harvests will grow bigger as the weather warms up. And don't worry, I haven't put in any tomatoes or peppers yet.... it isn't even Easter! We'll generally get one more good snap of winter that week and I'm not that brave without the hoop house covered and the soil warmed up yet. They are still cozy in the greenhouse getting more leaves on them.

The melons and cucumbers were peeking up out of the soil this morning, too. Ahh, spring can't be too far away - can it?

Stay warm and make it a great day!