When the Farm Meets Reality 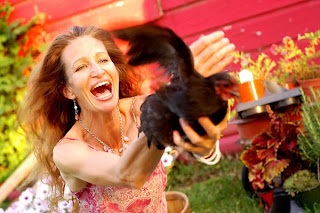 Life on the farm is usually "kinda laid back", to quote a famous song. However, it has its moments. Like this morning at 4:23 when I was awakened by the hysterical screeching of one of my hens outside my bedroom window. Something was after her or her nest most certainly as it was not courting time and that was not a cry of "leave me alone dear, I'm not in the mood right now!".

So I went flying out the front door, not sure what I thought I was going to do empty handed and barefooted, but I could quickly tell, she was still on the inside of the backyard fence line and not as far away as she had sounded. So back inside through the house I ran, this time picking up a flashlight and shoving my now freshly cut grass covered feet into a pair of muck shoes, out the back door to the huge oleander where she must have been hiding prior to her being accosted.

My glasses were not in the bathroom where they normally were, so I was half blind, but there is not much question in my mind that the white furry flash I saw in the corner dragging off my hen was that of the tail of a skunk that used to compete for my barn cat's dinner every night. (my barn cat has disappeared, by the way, and now I'm wondering if Pepe had something to do with that, too!)

I had a stick in my hand, as my gun was in the barn from having just recently chased off a stray dog who had come sniffing around looking for lunch the other day. And without anything else all I could do was hope to scare the skunk off into leaving my sweet hen to possibly recover from whatever damage he may have done to her so far. No such luck....he dragged her off under the house where I heard her final gasp of a half screech. My poor girl. I was too late to help her.

They won't always stay up close to the barn where they are much, much safer. It is these renegade chickens that brave the cold, cruel urban world of reality outside of the safety of their farmyard that I often lose in the still of the night. Either to an animal catcher, y'all remember the rooster's tail story back a year or so ago, or to a hungry four-legged predator. Even the snakes that patrol the barn are more interested in rats, eggs (which I try to find every day) and scaring my horse boarding customers than taking on a full grown chicken.

Now the race was on to see if I could perhaps save her nest of eggs, as I didn't hear any chirping babies left behind, and I had a broody hen who would surely adopt and incubate them the rest of their way. While mosquitoes surely fed on my bare legs and arms, I pushed aside the thick branches of the old mature where I figured she'd been nesting just moments earlier. Thick, heavy coverage - no wonder she thought she was safe in there. No dog would have ever found her, that is for sure. But the only thing I could find, even after returning to the house to hunt down my glasses so I could actually see, was a surprised mouse staring back into my flashlight glare.

This is the part of farming that is not enjoyable. I treat my chickens like pets, many are named, and it is much different to lose one of these than when one of the thousands in a flock of nameless birds disappears and no one even notices, except maybe the dog on duty who had fallen asleep on the job. Not that most all farmers with a heart don't dread the loss as I do, and I've come to accept that I can't always protect all of them, but it is harder to tell one is missing when they are not part of the handful of critters joining you for lunch outside by the house or greeting you at the back door for breakfast several times a week - hoping you drop a crumb of that sandwich or toss them a stale cracker or some of dinner's scraps. Because, don't ya know, there isn't enough for them to eat on the 2 or so acres they roam all day.....

Well this was in much contrast to the potential winner of a funny home video contest from an event the other day when the trailer turned into a spontaneous see-saw as I pushed down on the trailer hitch from the neck of the trailer....and the tiller and tractor implement became partially airborne, along with my water bottle and a few other things....thankfully, I was solidly standing on the ground and did not join them in a heap on the tailgate of the trailer. I didn't hear any distant laughter so I don't think my moment was witnessed by any of my next door neighbors who surely often get a chuckle out of my moments of learning curves....another thing about urban farming - you more often have an audience than when your farm is surrounded by other farmland, so many of your farm escapades are not just your own to muse over. Oh well, keeps me and my neighbors amused.

I suppose I'll get an extra early start today, now that I'm extra wide awake. Maybe make myself a fresh batch of blueberry muffins for breakfast since I have an extra hour or so before the sun comes up and I break the news to Nobutt that one of his companions is gone. And I'm not much of a skunk hunter....but I see a call to the wildlife management group later today, I've had about enough of Pepe and his gang, he better hope they find him before I do.

Eat Your Food - Naturally!
Posted by Eden's Gardener - Marie at 4:52 AM