A few weeks ago we were in the first frost “watch” mode of the season. That is, the local prognosticators were calling for an earlier than usual first killing frost that sent many folks scrambling. But it never came. At least, it never frosted here at the farm.

But with this new, much more severe sounding “polar vortex” forecasted recently, frost seemed more likely to happen and it seems everyone is calling it quits on summer crops. (Whatever happened to the much friendly phrase – “blue norther”?)

At first, they were calling for a light frost, something that would give us a temperature range of about 32°F down to 28°F. This temperature range affects the most tender of your summer garden such as beans, cucumbers, eggplants, melons, New Zealand spinach, okra, peppers, pumpkins, summer squash, corn, tomatoes, amaranth, and winter squash plants, although if the skins are hardened on the latter, a light frost won’t affect the fruit itself. 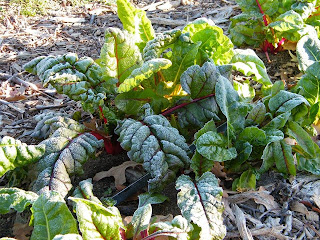 Other conditions must be present for a frost to set up on the plants when temps are hovering at 32°F, such as calm air and a clear night sky. This is also known as a “radiation frost”, and is generally what happens when we wake to “Jack Frost” on the pumpkins for the first time in the fall. Although, with the way the winds blew in with much colder temperatures, this event may well qualify as an advective frost, as occurs with a strong cold front.

A hard freeze occurs when temps are colder than 32°F for four or more hours, and temps get below 25°F. Not too many veggies appreciate these temps, although winter crops such as broccoli, Brussels sprouts, cabbage, collards, kale, kohlrabi, mustard, onions, parsley, peas , (but you may lose the blooms), radishes, spinach, turnips, leeks, and sorrel, are often “sweetened” instead of damaged by them, and don’t usually require protection. Although I’ve been known to cover seedlings if they’ve not had a chance to harden off.

"Deep swings in the weather can take out plants that would ordinarily be hardy.  But then we never experience 40 degree temperature swings in North Texas, do we?"

While the above lists are a good rule of thumb, and should be taken into consideration when planning your garden layout, I’ve seen exceptions to all of these rules at various points, on various plants. The more mature a plant, the higher off the ground it generally is, and the more susceptible to frost it will be due to losing contact with the ground heat. Deep swings in the weather can also take out plants that would ordinarily be hardy.  But then, we never experience 40 degree temperature swings in North Texas, do we?

Many factors can affect frost.
Sometimes, an area will escape a forecasted frost if it is somewhat protected by its micro-climate such as often exists in close knit, highly cemented, urban areas. The heat of the day is held in by the buildings, parking lots, and side walks.

That’s why many times a small backyard garden isn’t affected by a light, brief drop in temps, like one in a wide open space. Like this urban farm. 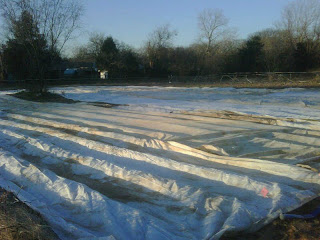 Although, if you have an inner urban property that exists at the bottom of a slope, or the top of one, you may experience a frost, while a neighbor on the side of the same slope, may not.

Experience over the years on a property is the best teacher for whether or not you’re likely to see damage based on a forecast – IF that forecast ends up correct. One extra push from a strong weather system, could mean an unprotected plant may not make it if temps end up dipping just 1 or 2 extra degrees.

It’s probably not too hard to cover most small back yard gardens, so if you want to try to preserve yours, you may as well be safe, rather than sorry, and cover it up. (More tips on how to do this, below.)

Time to Prepare
As seems par for the course, we had a few very nice days ahead of the predicted cold. I like to take advantage of those days to prepare. And we did just that here at the farm. Tugging on a 100’ x 15’ piece of frost cloth with 25 mph north winds can probably be equated to trying to struggle with the parachute of, say, the Jolly Green Giant during a Minnesota winter. Not fun.

And while it was still a bit windy while I was giving the farm intern his first experience with this winter weather drill, we were pinning frost cloth down in a brisk, easterly wind with the temps near 75°F, not 35°F. The wind chill is much more pleasant at the former.

Additionally, you’ll increase your soil’s heat holding capacity by about four times, if it’s well irrigated beforehand. That’s why you’ll hear me saying to be sure to “water in” your garden, before a frost. Cornell University says it can affect the air above the soil by 5 full degrees, which is a big deal when temps are hovering near freezing over your heavy laden, late fall tomato, basil or eggplant crop!

Some folks decide it’s just not worth the trouble to try to save summer crops and let them go by way of a natural season ending frost. But often, as had been the case the first few winters I was farming, the first predicted frost comes in early to mid November, the low temps last briefly, and there is little to no damage, followed by several weeks of mild weather.

We enjoyed summer squash well after Thanksgiving, tomatoes and summer squash at Christmas and didn’t have to cut all of our basil until around New Year’s. Lately, though, winter has been hitting earlier, and harder. Time will tell if the few hours of prep time will pay off. 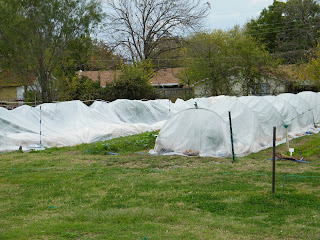 To Cover or Not to Cover
By now, you’ve either decided to bother or not, and I’ve covered this topic a few times in the past, but it bears repeating. Frost cloth is designed to trap heat from the ground, under the blanket, not keep cold air from touching the plant.

It’s for this reason that unless you’re stringing lights inside the cloth to keep that palm tree warm, simply tying a sheet over the top of a tall plant is not likely to do much good. And I’m not entirely sure how well doing that works, I’ve never tried it.

Unless you’re able to keep soil heat radiating up inside that blanket to protect the plant, there’s a good chance you’re wasting your time making lollipops out of trees.

You should never use plastic directly on a plant, without first protecting it with at least a cloth sheet. Plastic conducts the cold. A hoop over low growing plants is also helpful in protecting as a heavy frost can form on the surface of your frost cloth and burn the tips of leaves it’s touching.

So, in review;
1-Decide if the temps are going to dip below freezing long enough to damage, or just to chill the air enough for a hot cocoa. If you’re not sure, plan to protect plants based on predicted temps and above lists.
Hard freeze range – 25°F or lower; 4+ hours below 32°F
Light frost range – 32°F - 28°F, a bit warmer if dew points are right with calm winds and clear skies

2-Irrigate the garden soil, thoroughly. Moist soil holds in more heat than dry soil. (but don't forget to disconnect that hose when you're done!)

3-Foliar feed with a liquid seaweed, compost tea, regularly, but for sure before a frost. The higher the plant’s brix reading, (the more sugars present), the less likely plant cells will experience damage from the frost. Healthier gardens tend to fare better than stressed ones.

4-Harvest any tender fruits, such as ripening tomatoes, peppers, summer squash (and blossoms), even if you cover to try protecting the plant. Often the fruits themselves will not make it through if ripe or nearly ripe.

5-Cover the garden while the sun is still warming the soil in order to trap as much ground heat as possible. Use bricks, boards, sand bags or special frost cloth fabric pins to secure edges of cloth against the ground, closing gaps where air can leak in/out.

For the really adventurous, you can try to extend your growing season by a technique used by Eliot Coleman up in Maine where he gardens all year long. After you’ve covered with frost cloth, pull a layer of greenhouse plastic over top and secure the edges. This creates a deeper layer of protection, sometimes up to 3 zones worth of coverage, from a short blast of cold.

I tried it one year, almost by accident, and was pleasantly surprised by how well it worked.

As I type, the temps are still in the mid 30’s, and the dew point was at 24°. I still don’t quite understand all of the meteorological factors involved in predicting frost, but it felt like frost was imminent earlier when I did my final walk for the evening.

And sometimes, a farmer’s intuition is all you need.

PS- We hit our goal, even exceeding it by a bit, for our on-line fund raiser last weekend. Thank you to everyone who contributed, pitched in by sharing, tweeting, etc. Watch for future blog posts on lessons with the new loader.
Posted by Eden's Gardener - Marie at 4:10 AM